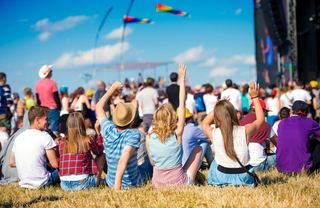 You’ve already scored one of the hottest Pleasanton apartments for rent, but did you know that there are even more ways than that to kick up the heat this summer? The 2018 Concert in the Park Summer Series is coming, and it’s bringing some of the world’s most talented musical acts right to the heart of Pleasanton.

For a bit of perspective, just take a look at some of the fun that was had at last year’s concert series. Retroactive, Audio Illusion, Magic Moments, and many more graced Lion’s Wayside Park, showering crowds with their unparalleled performances. This year, the action will be just as riveting, with a series of star-studded shows that are sure to rock the house. So, what are you waiting for? Read on, and learn more about how you can get in on this eclectic mix of music.

Who’s Going to Be There?

An excellent question, with an answer you won’t find disappointing. This year’s lineup is filled with an alluring ensemble of rock, bluegrass, big bands, oldies, indie, and more:

As you can see, things kick off on June 1st, and the concerts keep coming every Friday at 7:00PM until August 31st. The location is Lion’s Wayside Park (at First and Neal Streets), and the atmosphere is going to be electric. Let’s take a look at some of those performers, shall we?

These Cali natives have been active participants in the music scene since youth, honing their talents to their razor’s edge, and you can see from their expansive setlist that they have the chops to do just about anything groovy.

As for their stage presence, just check out some of these performance videos to get a good idea of how they can rock a crowd. Tight grooves, stunning vocals, and mastery of their instruments seem to be Retroactive’s guiding lights.

Adding some high-energy horn-playing to the list of shows will be the Cooltones. This stellar big band has been performing since the mid-90s, featuring 5 saxes, 4 trombones, 4 trumpets, and a complete rhythm section. All East Bay locals, the members of this supergroup are also active across the San Francisco music scene.

Michael Beck is a veteran of the country music scene. He and the Michael Beck Band will be a part of the Concert in the Park Series, showing the crowds what a soulful six-string and equally soulful voice can do. Backing Beck will be his bassist, Allan Villasan, steel guitarist Ron Wright, and drummer Jason Lee White.

The Bay Area’s official party band, The Groove Doctors, will be gracing the stage as well, slinging an array of disco, funk, soul, classic rock, 80’s-90’s, top 40 hits, and more. It’s a thrilling combination that get crowds in the swing of things — be sure to bring your dancing shoes.

Bringing a touch of folk to the park will be Crawdad Republic. You might remember reading about them in the East Bay Times, and they’ve come aways since them. You can check them out on their homepage, and be sure to take a peek at some of those performance vids.

Any band that self-describes as “seasoned” and “grizzled” certainly has some miles beneath their belt. Audio Illusion doesn’t disappoint, bringing “rock, pop, and blues ‘illusions’ of songs from the 1950's to the present.” Their sound is unmistakable, and you’ll delight at the the performance that these performers will deliver.

Indie darling Michelle Lambert took the world by storm with her 2015 debut, Warrior. A true musician at heart, Lambert started at a young age playing the violin, eventually picking up other instruments and honing her vocal talent at Berklee. She draws from a wide range of influences, and her eclectic tastes are clearly reflected within her own works.

This party/event band is game for any occasion, and they’re always about putting on the best performance possible. You’d be best describing them as Rock & Roll/Dance Party music, and they’ve got a wide selection of hits on their setlist that span the 1970s and 1980s. They’ll be bringing the thunder for the Park Summer Series, so be sure to get out there if you’re ready for something energetic.

Remember, there will be plenty of other bands on the lineup. Check the schedule and scope out your favorites then head to the park when you want to see a show this summer.

Will It Just Be Music?

Music might be the main attraction, but it’s worth checking out the Pleasanton Downtown Association’s event page from time to time. The association is always putting on great events and helping to bring the community together. Best of all, events in Pleasanton’s downtown are just a hop, skip, and a jump away from one of the best places in town to live.

Who Knew that Pleasanton’s Apartments for Rent Could Be This Much Fun?

You likely did, if you’re a longtime resident. Fine communities like Vintage epitomize the fun, luxury, and thrill of the picture-perfect, Bay Area lifestyle. If you’re new, though, you’ll definitely want to check out what the neighborhood has to offer and add this one to your short list of new places to live. You’ll be glad you did, as you’ll not find magical moments like these anywhere else.