History of the Easter Egg Hunt 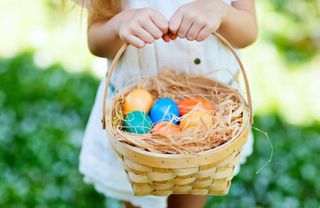 Whether you celebrate Easter or not, you’re probably familiar with its many traditions. Stores are filled with chocolate rabbits, families gather for a delicious meal, and children love to hunt for brightly colored Easter eggs. Children in and around the San Francisco apartments for rent will soon be microwaving peeps and dying their eggs, but have you ever wondered where these traditions started?

As it turns out, Easter finds its roots dating back thousands of years. This article dives into the history behind the holiday and why people still hunt for eggs today.

While many today associate Easter with Passover, the origin of the term predates early Christianity and Judaism. The earliest refences to the word Easter itself are found in a 7th to 8th century writing by a monk named Bede, who traces the word’s roots back to a Germanic goddess named Eostre. Bede notes that celebrations were held in honor of this goddess in springtime.

While little is known about this pagan celebration, Bede’s writings show that the tradition was quickly adopted amongst the people of the first century as a new holiday. English, Latin, and Greek cultures began celebrating Pascha, or Passover, with Christianity’s rise in popularity at the time.

In sticking with the origins of the tradition, Easter was often held on the first Sunday following the first full moon of the spring equinox. Dates very between cultures and religions, however. What has always remained since its pagan roots is that Easter celebrates a time of rebirth and renewal.

While scholars continue to debate exactly which pagan culture’s traditions are most closely associated with Easter, most point to Bede’s writings of Eostre. The goddess’ symbolism often involved rabbits and eggs thanks to her association with springtime.

The egg itself is a symbol of renewed life and fertility, which falls in line with various spring motifs like blossoming flowers or green fields coming back to life after winter’s end. So, the symbolism of rabbits and eggs make sense, but when did people start coloring and hiding their eggs as a tradition?

Believe it or not, people have been dying eggs since ancient Egypt. At that point in history, both Egyptians and Persians colored eggs to liven up their springtime festivals. These cultures also viewed the egg as a symbol of renewal, as so many have throughout history.

To the ancient Egyptians, the egg symbolized the renewal of the summer sun. To Christians, the cracking of the egg shell is meant to symbolize the opening of Jesus’ tomb on the resurrection. Regardless of the belief or period in time, the egg is synonymous with this concept of life renewed. What does that have to do with hiding them and hunting for them, though?

The Egg Hunt and the Easter Bunny

History has a way of changing things, and these once-pagan symbols slowly turned into entertainment for children as the Easter celebration carried through the centuries. Much like the exact origins of the holiday, the first appearance of an egg hunt or even the Easter Bunny is unknown. However, both were common practice throughout Europe by the 17th century.

Most scholars believe these practices came out of Germany shortly before. Rich with fairytales and folklore, the Germans may have took the symbol of the rabbit and turned it into a tall tale to amuse children. Parents would also take brightly colored eggs and hide them in or around their homes for children to find on Easter Day.

Backing this origin up is historically renowned Protestant Christian Reformer Martin Luther, who hid colored eggs every Easter Sunday that the women and children of his church could hunt for. Luther came from Germany, probably bringing the tradition with him and helping it spread to other parts of Europe.

As time went on, Easter traditions became so popular that companies formed around it. Cadbury, for instance, founded in 1824 as a chocolate company and held Easter egg hunts to promote their candy. Thorntons, another chocolate company founded in 1911, uses the holiday for the same reasons. In 2015, they even created a hunt using geocaching where GPS users could hunt for eggs hidden across the United Kingdom.

In 1985, a town called Homer in Georgia made it into the Guinness Book of World Records for hosting a hunt with 80,000 eggs. Companies even produce Easter eggs for children with visual impairments that emit various noises. While its origins and even current reasons to celebrate vary, there’s no denying the popularity of this timeless tradition.

You and your family can get in on the fun this Easter with the [downtown Pleasanton’s Bunny Hop Scavenger hunt], located near the Vintage apartments. With beautifully appointed homes, (http://www.pleasantondowntown.net/event/details/473)resort-style amenities, and rolling lawns, this contemporary community of luxury apartments is as much an escape as it is a destination.

Residents can relax by the resort pool, mingle with neighbors in pocket parks and courtyards, or stay active with a state-of-the-art fitness club and yoga studio. A retail plaza featuring over 30,000 square feet of onsite shops and restaurants makes a night out moments from your front door, while a pet spa and Wi-Fi lounge elevate your sense of living. Packed with resort-style amenities, Vintage contains everything you need to relax and unwind.

The surrounding arroyos and foothills offer breathtaking views, while local wineries and parks provide a stellar community experience here in Pleasanton. From swimming at Shadow Cliffs to hiking the local recreation trails, you can find an array of year-round enjoyment in this California locale.

Welcome to a distinctly new leisure lifestyle. Welcome to Vintage.