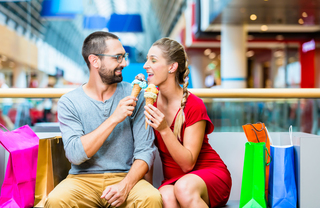 It might seem nigh-impossible, but something is about to make living in the apartment homes in Pleasanton a lot more appealing. “How could that be?” you might ask yourself. Living in Pleasanton already means being in one of the safest, most scenic towns in the Bay Area — what could be better? There are three simple words that you might not have anticipated: new shopping center.

According to a recent article from Pleasanton Weekly:

“The new, 112,000-square-foot Pacific Pearl shopping center on the southwest corner of El Charro Road and Stoneridge Drive won't officially open until July, but already its 85°C Bakery Café and other eateries are winning rave reviews.”

There’s a chance you’ve already passed by the area and wondered what was afoot. No worries. We’re going to give you the scoop on this new “Pacific Pearl,” along with a look at what new shops you can look forward to (among other pertinent details).

What’s the Word on the New Shopping Center?

Though it hasn’t officially opened yet, the Pacific Pearl shopping center has already generated it’s share of buzz. In addition to the above-linked Pleasanton Weekly article, you’ll find mention of it in the Mercury News (among other outlets) and reviews are already starting to pop up on sites like Yelp and Facebook.

More on public perception of the complex in a bit, though. First, let’s take a look at some of the facts surrounding this brand new construction. It’s set to open in July, right near Stoneridge Creek Park south of the Arthur H. Breed Jr. Freeway.

Like any good shopping hotspot, it’s set to have a mixture of various shops and restaurant, with the list of what’s already in operation and what’s coming soon consisting of the following:

Basil Delight: Will serve a mixture of Thai and Malaysian food. Coming Soon.

East Bay Vision Optometry Center: Optometrist claiming to be the place you need to go for the very best in eye care and the eyewear in Pleasanton. Coming Soon.

One thing that might immediately jump out about these many establishments is the preponderance of Asian-influenced offerings on the roster. This is by design, as the new shopping center was created with the goal of meeting demands “from the increasing number of Asian-Americans, who now make up 30% of the population living within 10 miles of the site.”

The shifting demographic realities, though, will also bring plenty of new and diverse choices to Pleasanton’s non-Asian population. Among these varied offerings, a few standout options have already made themselves known, with 85°C Bakery Café and a few of the other eateries netting themselves some prominent reviews.

Zagat notes that the establishment has a “playful” and colorful vibe, along with reasonable prices and a range of delicious coffees and pastries. 85°C Bakery Café is already getting packed on the weekends, and it’s setting the tone for other stores and restaurants yet to open in the Pacific Pearl center.

As for resident reception of the new shopping center, you’ll find representatives at both ends of the positive/negative spectrum, on Yelp, at least. User Judi M was not impressed:

“The parking is inadequate. A blended center would have been a positive thoughtful concept. Blink your eyes and you may as well be in Milpitas or Fremont.”

Harvey K, on the other hand, was quite pleased by the new offerings:

“I am excited about this new shopping center. It gives East Bay residents, like me, another destination to get my Asian food fix.”

What will you think of the Pacific Pearl once you grace its premises? Only one way to find out.

No that there’s anything wrong with that. Pleasanton is filled with so many great places to live — like Vintage — that you’d be forgiven for thinking the pinnacle of luxury living had already been reached. Communities like this represent a standard, one of comfort, beauty, and, of course, that old mantra of “location.” Come see what the fine spaces of this rental property — part of the pride of Pleasanton — have in store for you.