Receive Up to One Month Free on Select Units! 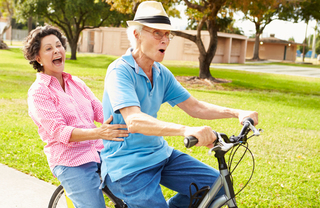 Anyone who's kept an ear to the ground about the goings on in Pleasanton may remember hearing something about the Pedestrian & Bicycle Master Plan as far back as 2009. Even during those draft phases, the goal of the plan was clear—outfit the city with a wealth of new pedestrian and bicycling options that would make getting around that much easier for residents:

"Once the master plan is adopted as the official policy document addressing the development of bicycle and pedestrian facilities in Pleasanton, the projects within the master plan will be constructed as City funding or grant funding becomes available."
That was years ago, however. What's the current status of the project? It turns out there have been some recent developments, and both current residents and potential future residents looking for apartments for rent in Pleasanton CA will want to keep their eyes on what's in the works.

An Overview Of The Updated Plan

In June 2017, the Pleasanton City Council voted to "adopt an updated Bicycle and Pedestrian Master Plan." According to the report, the updated plan was the result of 18 months of reviews, workshops, and discussions involving the local community, all under the auspices of the Bicycle, Pedestrian, and Trails Committee. The new plan expands upon the goals of the original:

"The plan, required to be updated every five years, retains a wide range of policies and programs; it also adds two new goals—creating a “low stress” bicycle and pedestrian network that everyone can use and enjoy..."
The update also takes into consideration the need to shore up the city's current bike network. According to the report, the plan is:

The report goes on to detail a few examples of what kinds of improvements would take place, like "buffered bike lanes" and "separated sidewalks." They add that the upgrades would take place under the guidance of a system that will assess vital success criteria (safety, safe routes to schools, connectivity, demand and feasibility). The updated plan puts a priority on work in areas "which would provide a better connected bicycle and pedestrian network in proximity to several schools," and estimates a five-year timeline for completing the plan's short-term goals. However, there is a wrinkle to getting everything completed.

In spite of the fact that there is already "$1.1 million in funding is available for some of this work," the total cost of the plans exceeds that amount. Other sources of funding will have to be secured in order to bring the grand vision of the new Bicycle & Pedestrian Master Plan to fruition.

Details. What Will The New Plan Achieve?

You can read a complete version of the updated plan here. The goal is largely the same, to "make Pleasanton a city where walking and biking are viable alternatives to the automobile, for work, school, and recreational trips." In pursuing this goal, the authors of the plan have laid out a clear vision, one that builds on and highlights the successes of the original. A few standouts include:

"...the extension of the Iron Horse Trail from Stoneridge Drive to the West Pleasanton/Dublin BART station, more than doubling the amount of Class I bicycle paths; achieving the Bronze-level recognition as a Bicycle Friendly Community; and increasing the amount of Class II bicycle lanes from 27 to 40 miles."
These are impressive achievements, but the plan also concedes that they have a lot of work to do moving forward. They've laid out five "general themes" for the new plan moving forward that include making bike and pedestrian paths safer, making them accessible for all age groups and abilities, increasing connectivity of existing routes, updating route design, and educating the community so that they are aware of the new options that will be available.

They also lay out the reasoning for pursuing the goal of a city-wide bike and walking path network, that highlights the need to increase quality of life, safety, and access for the citizens of Pleasanton.

From the authors' perspective, "walkability and bikability are seen as quality of life issues in Pleasanton, reflecting a desire to walk and bike to downtown, parks, community events, and schools." They believe that, currently, "high traffic levels" and "difficult crossings" make biking and walking in the community challenging, and the new plan will correct this issue and make Pleasanton more accommodating to non-motorized forms of transportation.

They cite several safety statistics, showing that while Pleasanton "ranked favorably for pedestrian safety overall," pedestrian-related incidents result in injuries "88 percent of the time." One of the goals of the plan is to use the current figures as a baseline, and progress to an even higher level of pedestrian and cyclist safety.

The plan is also intended to make it easier to get to "key destinations" by walking or bicycling. They cite that "pedestrian activity is high around Pleasanton schools," and that safety and convenience challenges arise during pick-up and drop-off times. With the plan implemented, these critical hours would become safer for children heading to and leaving school and make it possible to walk from school to home with greater ease.

Schools aren't the only structures considered key destinations. The plan also lists Pleasanton's three major transit stations (West Dublin/Pleasanton BART Station, Dublin/Pleasanton BART Station, and ACE Train Station) as sites of interest. Like with schools, the plan would support infrastructure so that pedestrians and cyclists can better reach these destinations without the use of an automobile.

The plan, in its entirety, is a lengthy read, but well worth it if you want glean more details about how the city will be changing, and how they envision creating a more pedestrian/bicycle-friendly future.

Apartments For Rent In Pleasanton CA

Anyone looking to take advantage of the changes coming to Pleasanton would do well to look into the luxury apartments at Vintage. This lovely neighborhood is part of the fabric of the city, and with the new plans in place to increase resident mobility, getting where you need to be will be a breeze. Vintage includes a wealth of amazing floor plans, fabulous resident amenities, and is all set just a mile from the city's historic Downtown. Check out what Vintage is all about and consider it for your new home in Pleasanton.