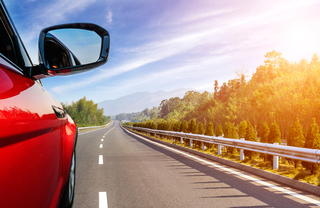 Roads might not be the first thing that springs to mind when scoping out a new place to live, but take a second to think, and there's no doubt they're an important factor wherever you want to settle down and call home. Beyond the economic impact, laid out in detail by sources like the Brookings Institute, there's an simple fact you can observe every time you drive down a poor one—you probably hate it, and you're likely wondering to yourself, "why won't they fix it?" as you drive down the pothole-stricken mess of a thoroughfare. In one of the Bay Area's pristine enclaves, the home of fabulous views and superlative dwellings like Vintage, Pleasanton, they've taken this simple lesson to heart, with some encouraging results.

According to this snippet of breaking news, the roads across the Bay Area on the upswing, and Pleasanton has scored high marks, coming in with a stunning 75 points. That's a score of "good condition" on the index used to rate the roads, and its outclassed, according to the article, by only one other city—Dublin. Let's take a moment to break that down.

The Pavement Condition Index (PCI) was the metric used to score Pleasanton's roads. The scale, a numerical index that ranges from 0-100, is a measure of the "general condition of the pavement" on the roadways in question. A score of "0" is the worst possible rank on the scale, while a score of "100" is the best. Developed by the U.S. Army Corps Of Engineers, the index measures two key components to arrive at a final score, according the the short primer linked above: "the type, extent, and severity of pavement surface distresses," and "The smoothness and ride comfort of the road."

How are these factors evaluated? It is "neither a complex nor time-consuming exercise," all told. Officials running the tests simply ride the roads, make their observations in a "systematic" fashion, and use these observations, along with software designed to aid in calculations, to assign a score to the road. They check for things like bumps and sags along the surface, potholes, cracking—anything that might make driving along the roads a less pleasurable experience. This is a condensed explanation, of course, and there are other variables involved in the process, but you can gain some valuable insight by checking out more from the "Pavement Condition Index 101" document linked above.

With that in mind, though, is the overall road condition that puts Pleasanton's roads in the upper echelon of the Bay Area? Hardly. There are a confluence of additional factors that make Pleasanton even more of a joy to ride around in. Take a look at this article, for instance, ranking the top 10 worst commutes in the Bay Area. Notice something? While a stretch of road in Alameda County, where Pleasanton is located, is listed, it isn't ranked high on that list. Furthermore, that congested spot ceases upon entering Pleasanton's bounds. That's because they've taken the issue of traffic around town by the horns, and taken forward-thinking steps to improve daily commutes for residents.

Through their Traffic Engineering Division, the city strives to "increase the efficiency and safety" of their entire transportation network. They approach this issue through a range of methods which include evaluating new techniques for managing traffic, and making multiple modes of transport (walking, biking, driving, etc.) bountiful to ease congestion on the streets. With more ways to get around, residents don't have to rely on their cars for every trip, reducing the burdens on the main roads.

Convenience isn't the only concern, mind you, the city is also devoted to making the roads safer, through an initiative they've dubbed the Neighborhood Traffic Calming Program (NTCP), which makes use of a combination of enforcement and educational methods to make sure that the drivers adhere to the rules of the road. This plan tackles issues like pervasive "cut through traffic" by approaching the issue from varied angles. Law enforcement is a key component, but they also list the installation of traffic calming devices, improved maintenance, and fostering neighborhood participation among other primary elements that help to make the program successful. This has resulted in roads that are not only easier to drive on, but safer as well.

One of the central tenets of the city's approach to managing traffic (and improving the roadways on the whole) is striking a critical balance between safety and ease. A clear example of this can be seen in how speed limits are assigned. Instead of installing severely reduced limits as a knee-jerk reaction to try and curb accidents and improve safety, the city has adopted a more common-sense approach, studying the issue and reaching a measured conclusion based on their findings:

"If posted speed limits are set artificially low, disrespect is created for the limits, and since they are not set in accordance with the law, they are not enforceable by law. The state maximum speed limit would then apply. The occasional driver attempting to obey the posted speed limit may decrease safety by causing additional lane changes, passing and tailgating."

Their conclusion? Correctly setting speed limits, and not simply lowering them across the board, is the best way to increase safety on the roads, a practice that has served Pleasanton well and contributed greatly to its status as one of the best places to drive around the Bay Area.

One final piece of evidence for Pleasanton's roads being some of the best around can be gleaned from these road accident statistics. In 2014, the fatal accident count was a mere "1," which resulted in two fatalities. This was well below the California average for the year (per 100,000 people), and while there have been spikes in some years, overall, the number of accidents in Pleasanton remains low, as the roads (and road safety) are something the city holds in high regard.

At Vintage, You've Got Prime Access To These Pristine Roadways

One of Pleasanton's most distinctive luxury apartment complexes, Vintage offers the perfect vantage for residents wishing to set up shop in town. It's a mere mile from the Historic Downtown District, and well within striking distance of many of the local hotspots. With gorgeous floorplans that offer a wealth of comfort and space, there's something for everyone, regardless of what their individual needs might dictate. Top that off with some of the finest community and resident amenities a modern apartment can offer, and you've found "vintage living," the rental community, distilled and perfected into its most convenient form.