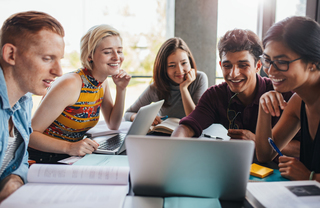 What are some of the biggest reasons people choose to live in any given area? For some it's the proximity to modern conveniences and things to do. They revel in the thrill of being minutes away from major shopping, dining, and entertainment options, and want nothing more than to be able to take a short jaunt to access all their hearts desire. Others are more keen on an area's potential employment opportunities. They're concerned with job prospects and want to make sure there's plenty of opportunity for advancement in their chosen field.

If you're the type that prefers knowing your residence is in an area where your children will get a superior education, though, we've got some information that will get you interested in seeking out Bay Area apartments in record time: the students in Pleasanton, CA, are some of the best in the nation. What separates this sunny city from many of its peers? We're going to take a look at why Pleasanton ranks so highly on the education front.

Take A Look At The Numbers

First, lets look at some of the simple statistics. TownCharts has a series of educational charts, put together using information from the 2016 American Community Survey. They show that numbers-wise, Pleasanton is ahead of the curve. First off, the level of high school graduates in the area is impressive:

When looking at the school dropout rate, Pleasanton keeps the trend up, showing that the number of dropouts is relatively low:

Point2Homes has their own data, showing the number of residents and their minimum level of education. The numbers show that most who live in Pleasanton have at least spent some time in college, and an overwhelming majority have attained an associate, bachelor's or graduate degree:

When breaking that down to percentages, you can see that 22% of people in town hold a Graduate degree, an impressive slice of the population, as, according to The Hill, the national average for individuals over age twenty-five with master's degrees is only 9.3%, meaning Pleasanton beats that out by 12.7 percentage points.

And what of Pleasanton's Kindergarten through 12th Grade educational system? There's information on that as well. StartClass' ratings show that Pleasanton ranks 58 out of 1061 cities in California. They also show that in Pleasanton, elementary, middle, and high school students score higher than the California average for math performance and reading/language performance. Furthermore, they have higher graduation rates overall, with economically disadvantaged students, students with limited English abilities, and students with learning disabilities graduating with more frequency than their counterparts across California:

Graduate at a higher rate than average for California

Pleasanton: 87.1%
California: 76%
Students With Limited English Abilities
Graduate at a higher rate than average for California

Pleasanton: 80%
California: 65%
Students With Learning Disabilities
Graduate at a higher rate than average for California

ED-Data goes a bit further into the numbers, showing that enrollment, daily attendance, and average class sizes remain steady in the area. The number of students taking AP tests and exams, as well as those exam results, is also in the rise in Pleasanton.

The assessment, which measures students' abilities to write, think, and problem solve, shows that Pleasanton is on the right track when it comes to equipping the next generations for the real world. Even so, the school system is not content resting on their laurels, and maintains a commitment to continual improvement:

"PUSD recognizes that there is still work to be done. The District continues to have the need to increase results for our English Learners in English Language Arts/Literacy and Math. The District has committed funding, professional development, and resources through its Local Control Accountability Plan (LCAP) over the next three years to support the success of PUSD's English Learners along with other student groups."
Encouraging news, and a good sign that Pleasanton's educational star will continue to rise in the coming years.

Ready for those Bay Area Apartments?

If childhood education is a chief concern for where you want to settle down, Pleasanton is a fine option. Within the confines of this pristine town, one community, Vintage, provides a place to live in superior comfort with a true sense of belonging. Nestled near Pleasanton's famed historic downtown, the location couldn't be nicer. With a wide range of living spaces to choose from, you can find the one that fits your lifestyle best. Add the superb amenities into the mix, and you've got the formula for true Vintage living, right here in the pride of Northern California. Check it out, and make this your first choice for your future in Pleasanton.